Access to quality mental health care is our mission.

Depression is a mood disorder that can affect anyone of any age. There is no one cause of depression, but traumatic events, genetics, and family history may all play a role in its onset. Depression goes beyond just feeling sad. It is normal to feel down after losing a job, ending a relationship, or experiencing the loss of a loved one. Depression occurs when you cannot get past those feelings after extended amounts of time. The world may seem colorless. You may find yourself thinking degrading personal thoughts, or about ending your life. Many people believe they can overcome these feelings by themselves, but it is vital to know that you do not need to suffer alone. There are many proven treatment options available to return you to vibrant life.

Depression’s symptoms vary by the individual, and depend on age, gender, or culture. It is important to remember that depression affects both the mind and the body. This means that symptoms can be both psychological and physical. 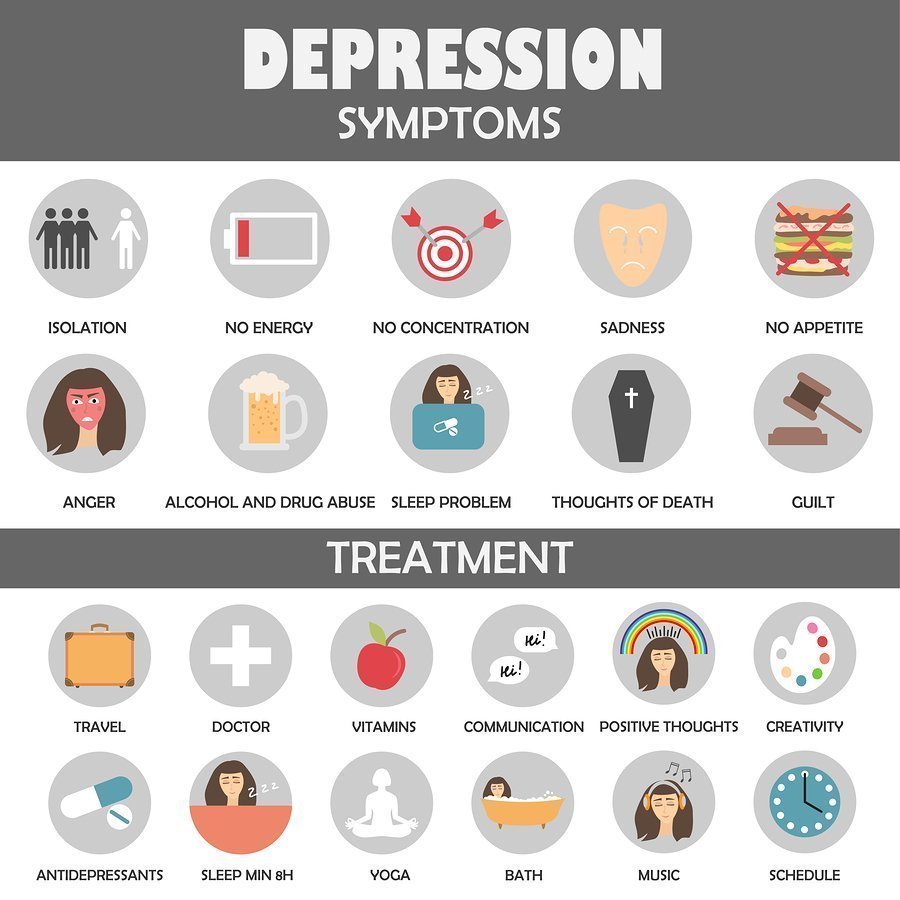 Depression belongs under the broad term of mood disorders. There are many types of depression, and while all have similar symptoms, they are also different in some key ways.

Major depressive disorder (MDD) is what many people think of when they hear the word depression. MDD is diagnosable after two weeks of symptoms. In 2018, MDD was the leading cause of disability in people aged 15 to 44.

Persistent depressive disorder, also called dysthymia, is similar to MDD but lasts for longer. To be diagnosed with dysthymia, you must experience symptoms for at least two years with no more than two months between symptomatic episodes.

Premenstrual dysphoric disorder(PMDD) aligns itself with PMS (premenstrual syndrome), but much more severe. In the week before a menstrual cycle, women with PMDD will find themselves feeling more irritable, depressed, or anxious. PMDD is a relatively new addition to the mood disorders category.

Seasonal effective disorder(SAD) occurs most often in the winter. It is usually caused by cold weather and lack of light. SAD often begins at the end of the fall or start of winter and subsides around the beginning of spring and summer.

Therapy is one of the most common treatments for depression. It allows you to voice your thoughts in a safe, non-judgmental place. Some people struggle to find the motivation to begin therapy, but taking the first step and scheduling an appointment means the beginning of your journey to feeling better. There are a variety of therapy strategies, including cognitive behavioral therapy, and motivational interviewing.

Cognitive-behavioral therapy(CBT) is an evidence-based approach that identifies and changes unhelpful patterns of thinking or behaving. Instead of examining the past, CBT focuses on current life events to identify healthy coping strategies for the future. CBT is often completed over a relatively short period of time. However, the insights gained during those sessions provide life-long tools that can help prevent depression from relapsing.

Motivational interviewing (MI) honors a person’s autonomy and encourages them to reform negative behaviors. MI is very goal-focused and relies upon the individual’s desire for change. The therapist’s role is to provide insight into all aspects of the conflict but ultimately allow the client to make their own decisions. This greatly empowers the individual, as it lets them know they have the intrinsic tools to facilitate changes that better their lives.

Most of the time depression therapy is done individually. But in some cases, your therapist may decide that family or group therapy will also benefit you. Family therapy helps identify household dynamics that contribute to depression and teaches loved ones ways to support the depressed person. Group therapy is a safe space for people with similar disorders to share their stories. The comradery of these sessions is often helpful in understanding that no one suffers from depression alone.

There are a variety of medications that can be used to treat depression. There are different classes of antidepressants that work in a variety of ways. Medication is most effective when combined with therapy. In some cases, medication may not be helpful at all. For this reason, it is important to build a healthcare team that you can trust, and that builds an individual treatment plan that best meets your needs. Below are the main types of antidepressant medications, and examples of drugs in each category:

Selective Serotonin Reuptake Inhibitors(SSRI’s) are the most recent class of antidepressants. They work by preventing serotonin molecules from re-entering the wrong side of the neuron. SSRI’s have the least amount of side effects of all the antidepressants. They are also the most commonly known medications and include Fluoxetine (Prozac), Sertraline (Zoloft), Citalopram (Celexa), and Escitalopram (Lexapro).

Serotonin and Norepinephrine Reuptake Inhibitors(SNRI’s) work similarly to SSRI’s by preventing the reuptake of both serotonin and norepinephrine. SNRI’s have few side effects that, if experienced at all, normally go away within a few weeks. Examples of these medications include Levomilnacipran (Fetzima), Duloxetine (Cymbalta), and Desvenlafaxine (Pristiq).

Tricyclic and tetracyclic antidepressants(TCA’s) work by inhibiting certain neurotransmitters. They are named after the number of rings in their chemical makeup; tri for three rings, and tetra for four. TCA’s tend to have more severe side effects than SSRI’s or SNRI’s. This is one reason why they are not used as frequently anymore. The most commonly used TCA’s are Amitriptyline, Doxepin, Imipramine (Tofranil), and Maprotiline.

Monoamine Oxidase Inhibitors (MAOI’s) was the first type of antidepressants. Today they are prescribed only in special situations, as they can have deadly reactions with certain foods. People who take MAOI’s must avoid eating things like aged cheese, certain meats, alcohol, and bananas. Due to these intense dietary restrictions, MAOI’s are often only prescribed to people whose depression is not managed with other antidepressants. Isocarboxazid (Marplan), Phenelzine (Nardil), Selegiline (Emsam), and Tranylcypromine (Parnate) are all FDA approved MAOI’s.

OTHER FORMS OF TREATMENT

For some people, medication and therapy are not enough to cure depression. These cases, called treatment-resistant depression, can be treated via transcranial magnetic stimulation(TMS). This procedure is non-invasive. It is carried out by activating strong magnetic fields around the areas of the brain involved in depression. There are very few side effects of TMS, which makes it ideal for many patients. TMS is often carried out multiple times a week, over several weeks. This, like every other depression treatment, is also dependent on the individual and their doctor.

Another way to treat resistant depression is through electroconvulsive therapy (ECT). This treatment involves passing an electric current through the frontal lobe of the brain to change the chemical activity of neurons. ECT is done under anesthesia because the electrical current induces seizures. To prevent any damage to the patient, a doctor also administers an anti-convulsive drug and monitors the patient closely. Altogether the procedure takes around 15 minutes. ECT is repeated about two to three times a week, depending on many factors. ECT is more invasive and has stronger side effects than TMS, but it is still one of the most effective depression treatments.

If you think yourself or a loved one is suffering from depression, reach out. Everyone deserves the opportunity to live a fulfilling life, something that is often hard to do when suffering from depression. Finding a trustworthy and supporting team is the first step to overcoming this disorder. The therapists at New Milford Counseling Center would be honored to be a part of your journey to recovery. To set up an appointment please call 860-740-2228, or email us at info@nmccct.com for more information.